The last time Northern Ireland qualified for a major football tournament, I looked like this.

It was 1986. As I sat in Windsor Park’s Railway Stand, watching a warm up game for the Mexico World Cup, I had no idea that the green and white rosette I wore would fall out of fashion faster than my beloved team would tumble down the FIFA world rankings throughout the next 30 years.

Since then, we’ve not come close. We’ve had to console ourselves with moral victories (one-off wins against England and Spain), whose points were ultimately worth nothing in our attempts to reach a World Cup or European Championships.

Away trips have been more about seeing a new European city, having a laugh and being an ambassador of sorts, rather than footballing success. To date, I’ve only witnesed a single victory on foreign soil.

These were games where even a single goal was something to be celebrated, regardless of the result. Even at home, a David Healy tap-in during a 4-1 defeat to Norway caused jubilation in the Kop stand – it was the first the team had scored in over 20 games.

Our ability to get behind the team and with typical Northern Irish humility, expect so little, yet remain so hopeful, is what’s kept us going.

That’s precisely what makes today seem so special, and so strange. At the end of an unnervingly consistent campaign, a win against Greece would send the Green and White Army to the European Championships for the first time in history.

That wee boy from the ‘86 Railway Stand ended up straying a bit further from home than he’d ever intended. If anybody needs him this afternoon, he’ll be in The Local, hopefully celebrating.

Now where in Minneapolis could I buy myself a new rosette? Perhaps it’s time they too made a comeback. 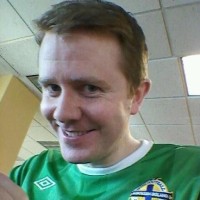